A Complete Guide of Carabiners and Their Uses

This article contains in-depth knowledge about climbing carabiners, starting from its origin as far back as 150 years ago, to life hacks, their various uses, and so much more. If you find you need more help understanding the uses of carabiners, you can always reach out in the comment section. We are more than willing and always available to help!

Today in this piece we will be discussing the following carabiner topics:

Carabiner (noun): A metal loop with a gate that is used to quickly connect components.

There are two ways in which the word can be spelt: carabiner or karabiner. The spelling that is most popular in America is the one with the letter “C” (carabiner). It originates from the German word “Karabinerhaken”, which translates to “hook for a carabine”. A carabiner, in lay man’s terms, is a metal loop with a gate, responsible for the quick connection of components. They are designed mainly for the fall protection industry. However, they have other ‘life hack’ uses that we will look at later in this article.

2. The Gate Mechanics of a Carabiner

The non-locking carabiner, otherwise known as “stright gate” or “bent gate”, have gates that open when pushed. There is room for the user to push open the spring-loaded gate and place another connection point inside, like a rope with a loop.

Non-locking carabiners are used for non-critical and redundant points in a climbing system. Examples include carrying gear, quickdraws, alpine draws

With locking carabiners, also known as “screw” or “twist lock”, a couple more steps are required in order to open the gate. A sleeve is used to secure the gate. For some, a screw action is needed to secure it, and for others, a twist action is required. Locking carabiners should be used at any point in a climbing system where failure could equal catastrophe.

Points Locking carabiners should be used include:

Cross-loaded carabiner: Cross-loading occurs when the load from the gate to the spine is along its latitude, and this can be dangerous, because carabiners are supposed to be loaded along their longitudes. Cross-loading makes them four times weaker.

Carabiners for gate opening: This refers to the wideness of the gate when opened. Gate opening is very important when it involves fall protection. The functionality of the carabiner can be limited depending on the opening size, as well as how it is clipped to racks, rope, and the likes.

So we all know carabiners are used often while climbing but they can come in handy in everyday life as well.

Below are some life hacks that anyone with carabiner can try!

5. Are Shape and Weight Important for Carabiners?

The short answer to this question is yes. To find out why, keep reading…

Different materials for carabiners: Steel carabiners are the most used for industrial rigging and rescue purposes. They are a lot more durable, heavier, and stronger than aluminum carabiners. The aluminum carabiners light and are made for recreational climbing or indoor and outdoor rock climbing.

Below are the most common shapes and types of carabiners:

Just as the name implies, these carabiners are shaped like a capital “D” and are very versatile. D-shaped carabiners are the best tools to use when it comes to clipping into protection, locking anchor points, and quick-draws. What this carabiner does is direct the force toward the spine of the carabiner reducing the chance of incorrect load positioning. They are generally lighter than most carabiners and have a wider gate opening.

Offset D-shape carabiners can also be referred to as “asymmetrical” or “modified-D” carabiners. They look similar to D-shaped carabiners, but the difference is in the design, which creates an even wider gate opening. Amongst the other types of carabiners, the offset D-shape is the most popular design, mainly because they have improved functionality as a result of the large gate opening, strong design, and are light.

Simply known as the oversized versions of the offset D-shaped carabiners, these are basically made for belaying purposes. Most climbers prefer this type of carabiner when they want to belay because the basket is rounded and wide making it a nice surface for the rope to travel across be it a hitch (munter, clove) or through a belay device.

Oval carabiner: This carabiner has been in existence for years. They are cheap and best used for climbing. However, it is important to know that they are weaker than other shapes, because of the transfer of weight between the spine and the gate. They also have a narrower gate and are a bit heavy, too.

As we already know, carabiners have been in existence for more than 150 years. As far back as the 1800s, soldiers carried carbine rifles with straps connected by a hook with a gate. As the years went by, they kept evolving and improving, and now, certifications are printed on carabiners.

The list of certifications to take note of are below.

Want to read more climbing related topics? Check out the links below:

This article is a collaboration piece between Pelican Rope and Têra Kaia. To find out more about this piece please visit the link below. 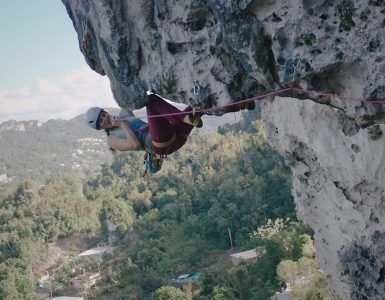 Nicole Vidal stars in a short film about sport climbing in Caliche, Puerto Rico called “Approach to Caliche”. Shot, edited and created by Isabela Zawistowska. In January 2020, Nicole Vidal and I decided to... 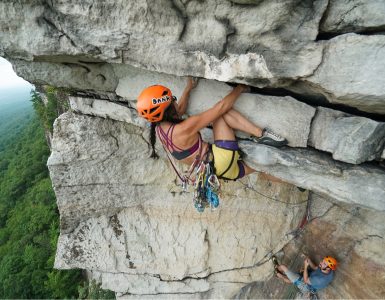 The number of female rock climbers hitting the crag is increasingly growing (hell yeah!), with women making up 42 percent of indoor climbers and 38 percent of outdoor climbers, according to the 2019 State of Climbing... 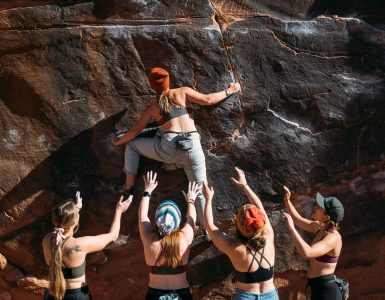 The Unexpected Spark That Connects Women at the Crag

At Têra Kaia, we designed basewear because we got tired of clothes that didn’t fit right, and didn’t perform on outdoor adventures. What we didn’t realize is that a piece of clothing could be so much more than that...

How to Pack For a Backpacking Trip

Visiting Bishop? Here Are The Best 8 Shops, According To Locals.

Learning from Local Women-Owned Businesses in the Eastern Sierra

Loving Your Body Image in Quarantine

Get connected with like-minded women in our Facebook Group:

Get connected with like-minded women in our Facebook Group: